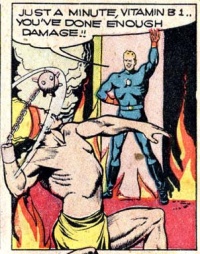 By Rob McCaleb on June 30, 2011 in Opinion and Comment, Politics, Top Stories

Sen. Dick Durbin (D-IL) plans to introduce legislation to regulate dietary supplements more strictly. Seems the Senate has been unable to do much of anything. Maybe they can agree on some supplement bashing?

Once again, Senator Durbin has taken a run at introducing legislation designed to restrict dietary supplements. The amount of inaccuracies and lack of knowledge in the press release is shocking. Durbin lumps 2 oz energy shots, which are clearly supplements, with other products. Does he really think 2 oz replaces a normal serving? He indicates that dietary supplements contain potentially unsafe additives right next to beverages that have undergone FDA approval. FDA approval? Is that a new regulation I am unaware of? While additives in foods and beverages must be approved food additives or GRAS [generally recognized as safe], there is no requirement for FDA approval and many ingredients are self-affirmed GRAS without specifically FDA approval.

As I see it, the issue is not the need for more regulations — the FDA just needs to enforce the regulations that are already on the books.

I would like to believe Durbin really has public health and safety in mind, but frankly, I don’t. The press release (as usual) says the bill is “Designed to Protect Consumers of Dietary Supplements.” FYI, Senator, proper use of pharmaceutical drugs kills around 300,000 Americans each year and injures two million more. (“proper use” meaning this doesn’t include the additional numerous cases of overdose, suicides and accidents such as pharmacy or physician error). By comparison, supplements are responsible for fewer deaths, meaning ZERO, Senator. Of course, the Senator should know this. It’s hardly new. In 1971 (!) the cost of caring for victims of drug toxicity accounted for 1/7 of hospital stays at a cost of $300 million a year. In 1998 the Journal of the AMA reported that over 2 million patients had a serious adverse drug reaction (ADR) and the 106,000 deaths put drug reactions between the 4th and 6th leading causes of death among all Americans. It seems obvious that drug toxicity, not supplement labeling, is a serious problem we need to address. Instead, Durbin is again demonizing supplements, especially “energy drinks” and “shots.”

Ironically, the specific supplements he takes aim at are energy products, which owe their activity to the most often-consumed and most socially sanctioned drug in the world — caffeine.

Suppression of growth and invasive behavior of human prostate cancer cells by ProstaCaid™: mechanism of activity.
Evaluation of the effect of Neptune Krill Oil on chronic inflammation and arthritic symptoms.