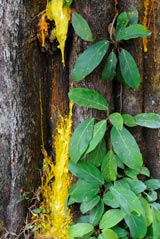 Discovery of 3 New Penicillin Compounds with Clinically Relevant Antibacterial Activity According to a recent study from Germany, researchers have isolated three new penicillin-like compounds with clinically relevant antibacterial activity – known as penialidins 1-3 – from the fungus Penicillium growing within the leaves of a medicinal plant from Cameroon. The plant, Garcinia nobilis (syn. Garcinia lucida) is related to the well known garcinias in commerce, mangosteen and Garcinia cambogia, common in weight loss products. G. lucidum bark is used in Camaroonian food and medicine.

The bark is used as an additive to palm wine production and in distilling fermented palm wine to produce liquor. The bark and the seeds, dried or fresh, are widely used for medicinal purposes to prevent food poisoning and to cure stomach and gynaecological pains, as well as to cure snake bites. (FAO)

While many plants have antimicrobial properties, the effectiveness of G. nobilis appears to be due to naturally-present penicillin. Penicillium is the name for a family of fungi found everywhere in our surroundings. The Penicillium described in this study is an endophyte, which is typically a bacterium or fungus that lives inside a plant without causing apparent disease. In fact, many commercially important plants carry fungal endophytes which enhance their growth, improve their ability to tolerate drought and even boost their resistance to insects and mammals that eat them. Penicillin antibiotics were among the first drugs shown to be tremendously effective against many previously serious conditions, such as bacterial infections caused by staphylococcus and streptococcus. Many types of commercially available penicillins are still widely used today, although their overuse has made many species of bacteria resistant to them. In the present study, the structures of the three newly discovered penialidins were first determined using sophisticated analytical methods such as nuclear magnetic resonance spectroscopy (NMR) and high-resolution mass spectrometry (HRMS). Next, the antibacterial activities of these new compounds were tested on the clinically relevant species Staphylococcus aureus, Escherichia coli, Bacillus subtilis and others. Penialidin 3 was seen to be as effective against S. aureus and B. subtilis as the standard antibiotic streptomycin. Penialidin 2 was also very active against S. aureus. By comparing the structures of the three new penialidins, the study researchers were able to deduce structural changes that would significantly increase the antibacterial activity of penialidin 1. In conclusion, three new penicillin-like compounds isolated from the fungus Penicillium growing within the leaves of a medicinal plant from Cameroon show clinically relevant antibacterial potential.   Technical Summary Three new polyketides named penialidins 1-3 were isolated from Penicillium harbored in the leaves of the Cameroonian medicinal plant Garcinia nobilis. Their antibacterial efficacies were tested against S. aureus and E. coli. Penialidin 3 exhibited pronounced activity against S. aureus as well as against B. subtilis similar to that of the standard antibiotic streptomycin. Penialidin 2 was also highly active against S. aureus. Comparison of the structures of the three compounds revealed that altering the substitutions at C-10 and C-2 can significantly increase the antibacterial activity of Penialidin 1. See the full article [LINK] for all the details.   The authors note:

‘Compound 3 exhibited pronounced activity against the clinically-relevant S. aureus as well as against B. subtilis comparable to that of the reference standard (streptomycin). Compound 2 was also highly-active against S. aureus. By comparing the structures of the three new compounds (1-3), it was revealed that altering the substitutions at C-10 and C-2 can significantly increase the antibacterial activity of 1.’