By Christine Williams on November 6, 2009 in All, Herbs, Science 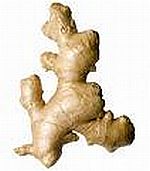 Ginger has been used for thousands of years for many different kinds of ailments.  Today the most common medicial use of ginger is for nausea.  It is used in cases of motion sickness when traveling, nausea during pregnancy, postoperative vomiting and gastrointestinal problems.  Also it is a wonderful herb to use during the winter months due to its warming properties.

Ginger is well known in the form of ginger sticks or ginger ale. If these are consumed during travel, the traveler imbibes, albeit subconsciously, a healing plant for motion sickness. The efficacy of ginger rhizome for the prevention of nausea, dizziness, and vomiting as symptoms of motion sickness (kinetosis), as well as for postoperative vomiting and vomiting of pregnancy, has been well documented and proved beyond doubt in numerous high-quality clinical studies. The use of this ancient medicine for gastrointestinal problems (stimulation of digestion) has been given scientific approval. Today, medicinal ginger is used mainly for prevention of the symptoms of travel sickness.