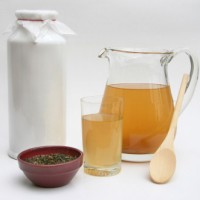 This popular drink is now being sold in most stores when just a few years ago it could only be found in health food stores.  This article indicates kombucha is beneficial against liver disease.

Kombucha, a fermented tea (KT) is claimed to possess many beneficial properties. Recent studies have suggested that KT prevents paracetamol and carbon tetrachloride-induced hepatotoxicity. We investigated the beneficial role of KT was against tertiary butyl hydroperoxide (TBHP) induced cytotoxicity and cell death in murine hepatocytes. TBHP is a well known reactive oxygen species (ROS) inducer, and it induces oxidative stress in organ pathophysiology. In our experiments, TBHP caused a reduction in cell viability, enhanced the membrane leakage and disturbed the intra-cellular antioxidant machineries while simultaneous treatment of the cells with KT and this ROS inducer maintained membrane integrity and prevented the alterations in the cellular antioxidant status. These findings led us to explore the detailed molecular mechanisms involved in the protective effect of KT. TBHP introduced apoptosis as the primary phenomena of cell death as evidenced by flow cytometric analyses. In addition, ROS generation, changes in the mitochondrial membrane potential, cytochrome c release, activation of caspases (3 and 9) and Apaf-1 were detected confirming involvement of mitochondrial pathway in this pathophysiology. Simultaneous treatment of KT with TBHP, on the other hand, protected the cells against oxidative injury and maintained their normal physiology. In conclusion, KT was found to modulate the oxidative stress induced apoptosis in murine hepatocytes probably due to its antioxidant activity and functioning via mitochondria dependent pathways and could be beneficial against liver diseases, where oxidative stress is known to play a crucial role.

Flaxseed: a potential source of food, feed and fiber.
Plants Against Liver Cancer