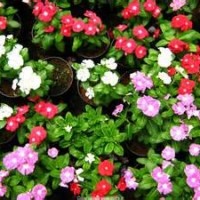 With a long history of both ornamental use in gardens and medicinal use in Ayurvedic and traditional Chinese medicine, the periwinkle exemplifies the advantages of exploring herbal traditions for important modern health benefits.  The plant now is considered endangered in some areas, and has also been controversial due to the facts that there have been patents on chemotheraphy drugs derived from C. roseus.

In particular, the plant is known for vinblastine and vincristine, which are TIAs, terpenoid indole alkaloids. Both vinblastine and vincristine are on the World Health Organization’s list of essential medicines as important anti-cancer medications used in treatment of Hodgkin’s lymphoma and leukemias. As well, over 100 other indole alkaloids have been isolated from the plant, although at present only five are being marketed. The isolation of these medications from the plant is time-consuming and costly; they are now generally synthesized in the laboratory.

The authors comment that “previously published reviews on MP [Madagascar periwinkle] mostly concentrate on the pharmaceutical and chemical compounds of the herb”.  Thus, the presentation of other aspects of the plant are useful. C. roseus is drought and heat tolerant, and can thrive in both shade  and/or sun, in various habitats, and is generally hardy.