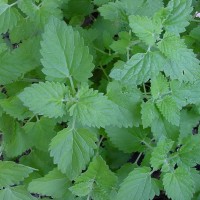 By Christine Williams on July 21, 2011 in All, Herbs, Natural Healthcare, Science

There are many herbal alternatives to DEET.  This study shows how catnip, Napeta cataria, can be a beneficial ingredient to your natural insect repellent.

The repellent activity of the essential oilof the catmint plant, Nepetacataria (Lamiaceae), and the main iridoid compounds (4aS,7S,7aR) and (4aS,7S,7aS)-nepetalactone, was assessed against (i) major Afro-tropical pathogen vector mosquitoes, i.e. the malaria mosquito, Anopheles gambiae s.s. and the Southern house mosquito, Culex quinquefasciatus, using a World Health Organisation (WHO)-approved topical application bioassay (ii) the brown ear tick, Rhipicephalus appendiculatus, using a climbing repellency assay, and (iii) the red poultry mite, Dermanyssus gallinae, using field trapping experiments. Gas chromatography (GC) and coupled GC-mass spectrometry (GC-MS) analysis of two N. cataria chemotypes (A and B) used in the repellency assays showed that (4aS,7S,7aR) and (4aS,7S,7aS)-nepetalactone were present in different proportions, with one of the oils (from chemotype A) being dominated by the (4aS,7S,7aR) isomer (91.95% by GC), and the other oil(from chemotype B) containing the two (4aS,7S,7aR) and (4aS,7S,7aS) isomers in 16.98% and 69.83% (by GC), respectively. The sesquiterpene hydrocarbon (E)-(1R,9S)-caryophyllene was identified as the only other major component in the oils (8.05% and 13.19% by GC, respectively). Using the topical application bioassay, the oils showed high repellent activity (chemotype A RD(50)=0.081 mg cm(-2) and chemotype B RD(50)=0.091 mg cm(-2)) for An. gambiae comparable with the synthetic repellent DEET (RD(50)=0.12 mg cm(-2)), whilst for Cx. quinquefasciatus, lower repellent activity was recorded (chemotype A RD(50)=0.34 mg cm(-2) and chemotype B RD(50)=0.074 mg cm(-2)). Further repellency testing against An. gambiae using the purified (4aS,7S,7aR) and (4aS,7S,7aS)-nepetalactone isomers revealed overall lower repellent activity, compared to the chemotype A and B oils. Testing of binary mixtures of the (4aS,7S,7aR) and (4aS,7S,7aS) isomers across a range of ratios, but all at the same overall dose (0.1 mg), revealed not only a synergistic effect between the two, but also a surprising ratio-dependent effect, with lower activity for the pure isomers and equivalent or near-equivalent mixtures, but higher activity for non-equivalent ratios. Furthermore, a binary mixture of (4aS,7S,7aR) and (4aS,7S,7aS) isomers, in a ratio equivalent to that found in chemotype B oil, was less repellent than the oilitself, when tested at two doses equivalent to 0.1 and 0.01 mg chemotype B oil. The three-component blend including (E)-(1R,9S)-caryophyllene at the level found in chemotype B oilhad the same activity as chemotype B oil. In a tick climbing repellency assay using R. appendiculatus, the oils showed high repellent activity comparable with data for other repellent essential oils (chemotype A RD(50)=0.005 mg and chemotype B RD(50)=0.0012 mg). In field trapping assays with D. gallinae, addition of the chemotype A and B oils, and a combination of the two, to traps pre-conditioned with D. gallinae, all resulted in a significant reduction of D. gallinae trap capture. In summary, these data suggest that although the nepetalactone isomers have the potential to be used in human and livestock protection against major pathogen vectors, intact, i.e. unfractionated, Nepetaspp. oils offer potentially greater protection, due to the presence of both nepetalactone isomers and other components such as (E)-(1R,9S)-caryophyllene.

Melatonin as a natural ally against oxidative stress: a physicochemical examination.
Pharmacological Review on Centella asiatica: A Potential Herbal Cure-all.